Since I learned to read and write (which was around the same time I learned to rock Michael Jackson T-shirts and ripped jeans), I’ve loved to do so. After studying English and education at The University of Iowa, I sought the lights of the big city and moved to Chicago where I taught high school English to hundreds of lively 9th and 11th graders. After becoming a mother, I left the classroom to finish my Masters in Literary Writing at DePaul University and begin a career as a freelance writer and editor while still getting my paper-grading fix by teaching college composition courses online. 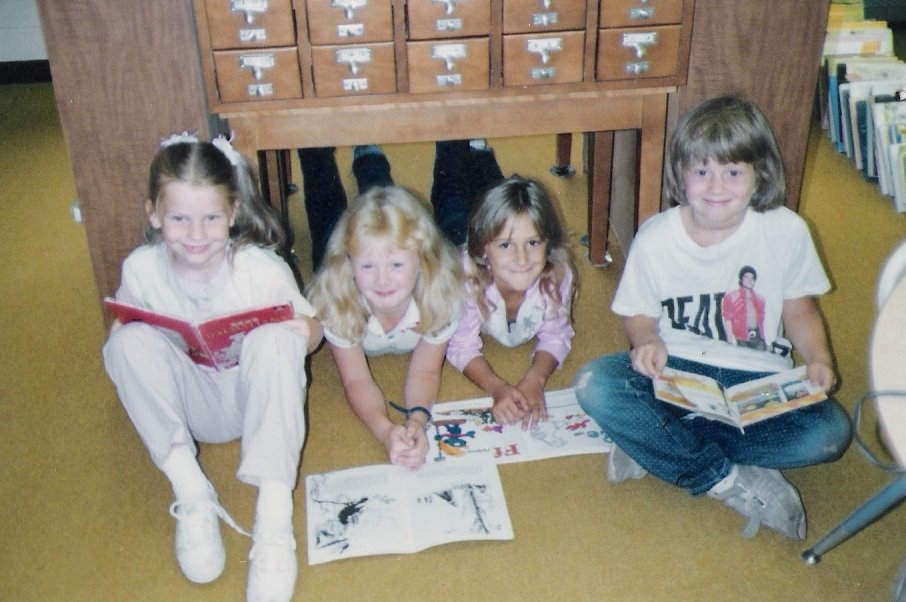 That’s me (far right) reading with friends in my elementary school library.

After the birth of our second child, my husband and I began to crave a land of abundant green space, free and ample parking, and doting grandparents. We made the move back to our home state of Iowa in 2007. I continue to write and edit, all the while managing a household that now includes three children, the youngest of whom was adopted in 2011. My writing has appeared in dozens of publications including the Chicago Tribune, Chicago Parent, Chicago Baby, ePregnancy Magazine, and Literary Mama. I served as the associate editor of Quad Cities Magazine, am a regular contributor to Radish Magazine and The Gold Book, a regional lifestyle magazine to which I contributed a column for four years. I have also written and edited copy for a variety of organizations ranging from The American Egg Board to The Design Group to Ripley Street Grille. I currently serve as the Director of Communications for Empower Tanzania and am part-owner of a coworking space.

My first book is called Mama Bear’s Manifesto and was published by Leafwood Publishers. I am represented by MacGregor Literary and still tend to rock 80’s fashion as I sip coffee and dream up new ideas.